Mujer Emprende presents its eighth program: Business ideas, how to generate and analyse them?

As per usual, the program, begins with a section containing a variety of news that could be of interest to entrepreneurs, after which the interview with Lola Garcia Martinez began. She is the vice-President of the Council of Fuerteventura, who spoke to us about how she is doing in her new position, her priorities, strategies to take into consideration to improve the internalization of companies, among other things.

In the second section "Learning from failure", Miriam Gómez Stunt participated, a CIFP Majada Marcial student who created a powerful business idea, even though it has not been implemented yet: "Healthy Power S.L.". She talked about what the main challenges were when coming up with an idea, how she decided to settle for this one and how she faced it, as well as what winning the 2nd entrepreneurship prize felt like.

In the next section called "In a few words", Úrsula Cruz Medina participated, the teacher responsible for the entrepreneurship network found in CIFP Majada Marcial, which she also happens to be the vice-director of. She gave us some tips that could be useful to create a business idea and how all of this is usually approached at CIFP Majada Marcial.

Finally, just like in every other program, we talk about some interesting facts. In this case, the facts were historical. This program is available on the Radio Ecca website.

Mujer Emprende will be back in April. In the meantime, we have one destination: entrepreneurship! 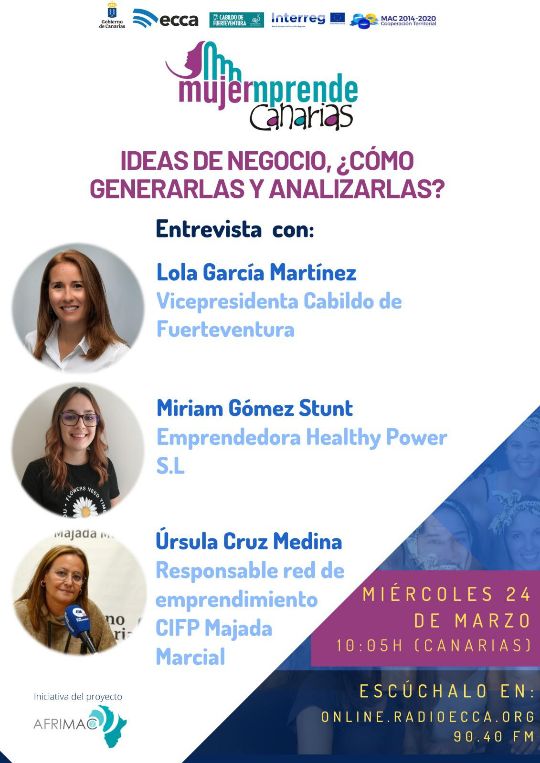